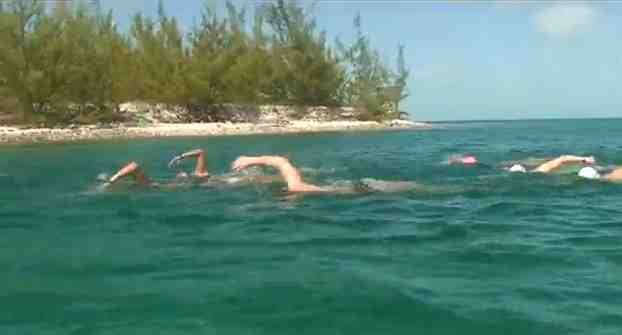 Swimming is a GREAT geezer exercise. It’s low impact, easy on the joints, and it’s generally concentrated on the upper body. It’s relatively easy to exercise major parts of your lower body–walking, running, riding a bike will all do–but upper body exercise is a little harder to come by. It’s also very important if you’re doing other water-related sports like surfing, stand up paddling, canoeing or kayaking, or even fishing.  But when you start doing it more you’ll want to do it better. It’s no fun to be splashing away ineffectively while others are gliding past.

I’ve been swimming since I was five years old–and haven’t improved much since I first started. Last summer in Hood River my friends were all on the Masters Swim Team, and were after me to join. After watching them swim I decided not to–they were way faster–but I decided it was time to get some coaching. I really had no idea how much my swimming skills had atrophied.

When I was in my early 30’s I lived in Long Beach, California and after work I would ride my motorcycle to Newport Beach, bodysurf sometimes at the Wedge, and then swim straight out for a mile or so, watch the sun go down, then swim back. I did that a few times a week most weeks. If I tried that now I’d be huffing and puffing in a hundred yards, but my recollection is that it was pretty effortless back then.

So now I’m back in Maui and hanging out with Bill Boyum a lot. Bill is an all-around waterman and a heck of a good writer. More about that later. But Bill swims a lot, and he called my bluff on giving me some pointers. So we met at Baby Beach to get things rolling. Bill swims with goggles and small bodysurfing-style fins. I happened to have the same fins, so I’ve got that going for me. I’m not interested in sprinting so much as distance swimming in open water. It’s a different discipline. I think my sprinting will ultimately improve as well, but for now I’m concentrating on distance.

Here’s what he showed me so far:

1. I need to keep my body as straight as possible in the water. My legs were hanging down some to compensate for my head raising too much. I was bending my knees too. When your body is straight in the water you can knife through a lot better, if your legs are hanging down or you are kicking from the knees like a frog you’ll have too much drag. Concentrate on bringing the head down so it brings the legs up. Your head weighs 8 to 12 pounds. Lifting that amount of weight out of the water when your body is at near neutral buoyancy is sure to make your legs drop. I’ve been trying to exaggerate this by getting my chin to my chest when I think of it.

2. Roll to breathe, extend to breathe. If you lift your head to breathe you’ll drop your legs which puts the brakes on. Instead, roll your shoulders and body to the side that has the arm extended. Glide and breathe in. Roll back flat and breathe out while you stroke. Roll, breathe in. You can breathe on every stroke at first, or every third which gives you a clean side to side alternation.

3. Reach, Dammit, reach–You need to get your arm way out there. Lose a couple of inches to reach to sloppy technique and you’re giving up five percent of your travel with each stroke. Multiply that five inches times ten thousand strokes and you’re a long way back.

So I’ve been practicing this quite a bit, and I’m seeing some improvement. But in the course of looking at some swimming books I rediscovered a swimming approach called Total Immesion. And I can tell right away that Total Immersion is for me. The focus is on streamlining the body, gathering power from the core instead of just your arms. Practicing specific, non-intuitive moves to improve overall performance. I’ve ordered the distance swimming book and DVD, and I’m waiting impatiently for delivery. In the meantime I’ve been looking at videos on youtube and practicing the elements. I’m seeing substantial improvement already.