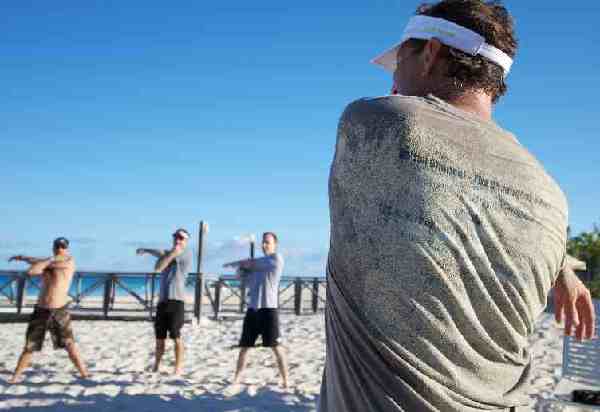 …and then you turn into one giant quivering abdominal cramp.

Some time ago, in a moment of monumental stupidity I mentioned to Dave Kalama that I wanted to try his beach workout. I have no idea what I was thinking. For those of you that are not currently surfers, Dave Kalama is an extremely talented big wave surfer, who, along with Laird Hamilton, pioneered the extreme sport of tow-in surfing in giant waves, and foil surfing, and stand up paddle surfing, Dave is enormously fit, I am not. Dave looks about as soft as fire hydrant and probably has about the same amount of body fat. I know he teaches normal human beings his workout routines at his Kalama Kamps, and hasn’t seemed to kill anyone yet. But I figured he probably toned those down a bit. I’d be intruding on his personal workout on his home turf. Still, I’d opened my silly mouth, and Dave called my bluff, so I was committed.

I showed up at Baby Beach at the appointed hour: 7:00 AM. When I got there, Dave’s cousin Junyah was stretching in the parking lot. “Shit! I’m dead, I thought.” As imposing as Dave is, he’s a teddy bear compared to Junyah, who has a set of guns like a battleship and probably weighs 230 with about an ounce or so of body fat. I have no problem picturing Junyah with a six foot warclub, pounding fat dumpy haoles into the ground like tent pegs. He looks pretty scary. Naturally he’s about as nice a guy as you are likely to meet. Funny too, but the prospect of working out with two elite athletes like him and Dave had my guts churning.

I shouldn’t have worried. If I’ve learned anything about Dave it’s that he’s a great teacher, and that means he pays close attention to the limitations of his students. While we were stretching Dave quizzed me about my injuries and medical issues. After 63 years as an adrenalin junkie there’s a pretty big catalog, but the worst of it is my shoulders and some breathing problems: a badly deviated septum and a bit of athletic-induced asthma. He shifted the stretch to concentrate on some of my weaker points

Off we went. The most interesting aspects of Dave’s workout are that it is so complete, so oriented towards being a waterman, and requires such simple equipment. A beach, some trees, and a rope and a lot of sand. Miles of sand. Dave has been experimenting with his workout and his rope for many years. With a couple of strategically placed handles and a carabiner it adds amazing depth to his workout.

We started with a light jog on the beach. Understand that I DO NOT run. Not unless something is on fire. Beat up knees, dodgy hips, and breathing problems are all the excuses I need. But with Dave and Junya chugging away I stuffed my whining back into the excuse bag and shuffled after them. Gotta say, even shuffling in soft sand on a path cut in the face of the dune is a bit much, and I was reduced to walking quickly, but the running part is how one gets from torture station to the next torture station.

We made our way to the top of a little rise and kicked sand around to make a flat spot. Went through a number of crunch styles including straight, angled, cross leg, leg lifts, and angle lifts. Then we moved to a handy log and did dips and pushups, straight and raised. I did far fewer of each set, and popped a nice sweat to help the sand stick to me. Back to jogging down the beach, this time doing some variations of exaggerated leg lifting and strides. As we did each exercise Dave would comment on how the exercise related to surfing or paddling or swimming. No question, he has thought this thing out, tested it with results in the water, and modified the exercises to optimize results.

We reached another area, this time with various twisted trees and logs. The rope came into play, forming handholds for angled twisting one-handed and two handed pullups (I guess you’d call them) flys, and pushups from an angled position. Hard to describe, this whole adventure needs a video.

More jogging to another station, this time we were hopping over logs in various ways, doing more dips, and another set of crunches. While the routines were challenging, this was easily the most enjoyable workout I’ve ever had. Dave and Junya kept up a hilarious conversation, and the surroundings were simply great. I commented on how fine it was to be doing this on a beach and Dave said he had actually reworked the routines so they can be done in a backyard. I don’t think it would be quite as wonderful as Maui, but the idea of enjoying an open air workout that so perfectly suits water sport is interesting. I could easily continue doing this routine in Hood River.

Our outward leg concluded with jogging with progressive breath holding, which was very hard for me. I’ve been practicing breath holding while walking, but the soft sand and my already oxygen starved condition made it really tough. I reached holding my breath for five steps and beathing for five, but Dave and Junya were clearly in some kind of zen trance, jogging without breathing for a ridiculously long time. I had little popping sensations at the edge of my vision–enough of that for me.

Then we started doing lunges. I HATE lunges. My trainer in Portland was a lunge fanatic–my least favorite part of exercising. She’d love Dave. We lunged for what felt like a mile. I reduced the strain to five steps normal, five steps lunging, but Dave and Junya kept it up forever. Then we switched to side lunges, then back lunges. Then back to a torture station for more rope-assisted moves. We made our way back down the beach to our starting point. When we got close we did mule drags, where Dave stood behind me and we interlocked wrists. I dragged him down the beach as far as I could–which wasn’t far. When Dave or Junya was the mule it looked like a mini sand storm headed down the beach. Then we did some “bear runs”–uggh–running on all fours like a bear.

To my distress we went past the point we had started from and approached a tall sand hill. “We’re going to run the hill–take this at the pace you feel comfortable with.” I was pretty comfortable standing and watching them, but I wobbled up the hill, only to discover there was a narrow ridge trail on the back that Dave and Junya had disappeared down. I wobbled down and found them running backwards back up the hill. Yikes. I followed at a sedate pace. Back and forth a few times with crunches and pushups on the top. Finally we walked back down and jumped in the ocean. I thought to swim a little, but my arms and shoulders said “no way”.

Junya told me that he wanted me to come whenever he worked out with Dave because normally Dave was completely insane. Nice to know I had had the lite version. I felt pretty damned good though. Not only had I survived, I felt really invigorated. The workout was really fun, and I knew I could progress doing it–not to Dave and Junya’s level, but I could get better and stronger.

That afternoon I went over to the southside and found a nice little windswell running. I went out in my OC-1 (One man outrigger canoe) for a little easy ten mile paddle. But when I discovered I could catch the little swells with some sprinting, it turned into a hard paddle. Given my novice status as a canoe paddler my stroke is not efficient. I lean too hard into the Ama (the outrigger float) to keep the canoe from huli-ing (rolling over). So when I’m paddling to the opposite side of the Ama I’m in a very awkward position for the stroke. The end result of a tough workout and overdoing it in the canoe was vicious abdominal cramps and a lot of pain in my left side chest wall, where I strained to make good strokes against my clumsy lean.

I wound up spending five nights sleeping in a sitting position. Finally went to see the Doc and he said I hadn’t really damaged anything, just took all those muscles to the far edge. I told him I thought it was mostly the canoe paddling. He said “I know Dave Kalama. You’re nuts. He’s an animal.”

A few days after the pain finally quit, I was talking to Dave about something else and mentioned someone had swiped my canoe seat out of the Jeep and Kai Bartlett wasn’t going to have a new one for me for at least a week. “Hey, I’m going to be off the island over Christmas, you can borrow mine until you get a new one”. We agreed to meet at Ho’okipa the next morning since we were both considering surfing at Lanes. I got held up, and when I arrived at the beach Dave was paddling in. “It’s fun, but not worth spending hours at it. I’m done, want to do a workout?” I couldn’t think of an excuse quickly enough, so we did. It was clearly a little lighter-weight version, but still a challenge. Then we paddled out to Spartans and looked for the wreck. Spartans reef is named for a tramp steamer that wrecked on it somewhere near the turn of the century. When the water is clear you can see the ribs and some of the structure. We poked around but couldn’t find it, caught a few waves that kicked over the reef, and then came in when the wind rose.

I had no ill effects at all, from the workout or the substantial amount of paddling afterward. In fact I felt great all day and only a little sore that night. Nothing that being a lifetime member of Team Advil couldn’t handle.

I told Dave he really needs to video the workout. It’s the best I’ve ever had, and it would be great for anyone that wanted to raise their game in the water. He’s considering it though the investment in doing it well would be considerable. I think with a reasonable price it would be a hot seller. No need for a gym, no need for expensive equipment. A cleverly modified rope and a beach or backyard and you have an ideal waterman’s workout.

Let me know what you think, I’d like to encourage him in this effort. Comments gladly accepted or you can just send me your email via the form below and I’ll contact you if I manage to talk Dave into this. No commitment on your part, just an expression of interest and of course I won’t use your email for anything else.