I’ve been into motorcycles since I was fifteen–I’m 64 now. Almost a fifty year love affair. For some of those fifty years I made my living as a motorcycle mechanic and Service Manager. I’ve had amazing days on motorcycles, and I’ve had awful ones when I got hideously injured or worse yet, when good friends were killed–including my closest friend. I don’t consider motorcycles to be an interest to be entered into lightly. You shouldn’t either, especially if you’re taking it up late in life. The motorcycle world already has far too many stories of guys getting their first bike at fifty, and then being killed when some ditz soccer mom jabbering on her cell phone makes a left turn straight into him. 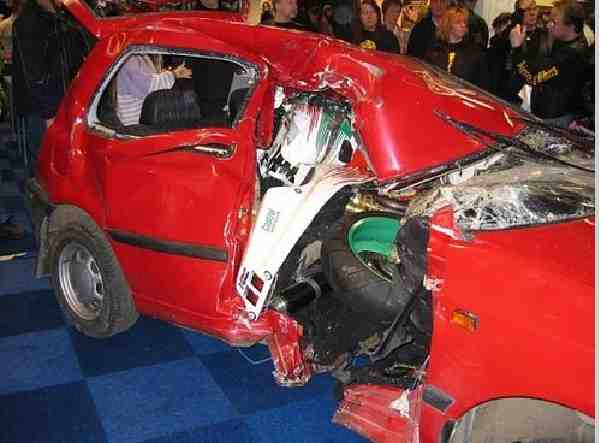 Yes, that’s a motorcycle wheel inside that car

There’s a world of difference between “not entered into lightly” and not doing it at all. If you do it right, your chances are much better. There might still be a Cienna out there with your name on it, but at least you can take advantage of every positive characteristic of your motorcycle to avoid that minivan full of yuppy spawn.

It Starts With The Right Bike
And Harley doesn’t make one. Sorry. After you have ten years of riding under your belt you can have one if you still want one. But as a first bike, Harley’s just give too much away in handling, agility, braking and performance. You want something agile, with fine performance, suitable for your weight and size. You DO NOT want a cruiser. The feet forward, leaned back riding position surrenders a lot of control. You also probably don’t want a faired sportbike. The ergonomics suck, the head forward riding position is only comfortable at speed, if your shoulders or wrist are even slightly dodgy they’ll be screaming in fifty miles. And they are clumsy at low speeds and in traffic.

What you want is a naked bike (what used to be called a standard bike) or an adventure bike (semi-off road). You want to be sitting in a comfortable, slightly forward-leaning position. Head high, so you can see what’s going on around you. Good mirrors so you can see if that truck behind you didn’t see the stop sign and is going to pass right through where you’re standing in ten seconds. The bike needs to fit you in every way. You need to be able to put your foot down and hold the bike easily, even on crowned pavement. If you’re on tiptoes on flat pavement there will be places that you will not be able to support a stopped motorcycle. 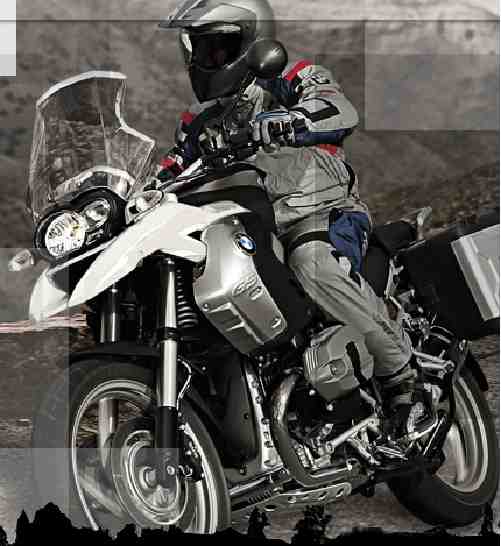 There are lots of choices–new and used. Don’t buy something too old, the value of motorcycles drop like a rocket when they roll off the showroom floor. You want something that still has a warranty, and more important that is reliable in every sense. Most used motorcycles have very low mileage. Don’t buy one with more than 30K miles on it unless it is a great bargain and has been perfectly maintained. If your prospective new used bike has a chain you should look at the rear sproket for signs of wear–a slight hooking of the teeth, or sharply pointed teeth. If the seller replaced the chain but left a worn sprocket in place you’ll be replacing the chain and sprocket shortly. Motorcycle tires don’t last very long and on most modern bikes they have a rounded profile. If the tire is worn flat in the middle and most of the tread id gone there, then it won’t last long even though the edges look fine. If in doubt, have a mechanic check the bike out for you. You want it to be perfect.

Next Comes Equipment
Get a good helmet. A new one. And wear it every time you sling a leg over your bike. EVERY TIME. Helmets are the first line of defense against the grim reaper. My son-in-law’s father had decades of experience on motorcycles riding many thousands of miles per year in all conditions. He got on a little motobike in a Central American country without a helmet and wound up dead from a head injury that would never have happened if he had a helmet on. All my helmets are full coverage except one I wear when I’m riding my vintage bikes, and even that helmet is modern construction, Snell approved. The little polo helmets and other fake helmets some guys wear are just plain stupid. No, you don’t look stylish with a good helmet on, but then you don’t look stylish with it off. The little fake helmets look absurd anyway. They aren’t even comfortable.

Leathers or Kevlar-reinforced Cordura riding jackets and pants used to be just for abrasion protection. That’s worth having, and if you’ve had massive abrasions as I have from the riding jacket I wasn’t wearing getting loose from the bungees and wrapping in the chain, you’ll understand the value. I had a big old shot of painkiller and sedative but I still went into shock from the agony of the doctor scrubbing out the tar and dirt. Abrasion protection is good. But some modern jackets also have impact protection and spinal armor. You can get three layer jackets that have a web inner liner with the armor and some kevlar patches that zips out for wearing when it’s too hot for a jacket. Then a second layer of waterproof wind protection, and finally a warmth layer. A good looking jacket that will cover you all year long in most places.

Boots can protect you in a fall or crash. You can certainly ride without them, but I rarely do. Gloves not only keep your hands warm but provide armor and abrasion protection. You can get all season gloves that have zip-on waterproofing and insulating layers. I find multiple pairs work better for me. I have a lot of safety gear, and I always use it.

Then Comes Lessons
You have no business on a motorcycle until you have taken BOTH a motorcycle safety course and a riding skill course. Most of the things that will save your life are counter-intuitive and in direct conflict with car driving experience. The guy in front of you slams on his brakes. If your reaction is to slam on your brakes, you’re dead–crushed by the truck behind you with the driver that didn’t see the brake lights. Take the lessons.

Then Comes Practice
There is no such thing as a safe road for a motorcycle, but you don’t need to be venturing onto the San Diego Freeway your first week. Stick to smaller, less traveled roads and less congested areas. Pay attention to your motorcycle and the traffic around you. You need to start learning to read the traffic, like a surfer reads waves. You watch people’s eyes and hands, and the front wheels of their cars. That will often tell you what lunatic, uncaring, clueless thing they are going to do before the car reacts to their input. You need to start establishing your safe(r) zones–back far enough from the car in front of you to give you room to maneuver if it stops suddenly, and push the cars behind you back by slowing when you know they are watching, then moving forward again to establish some margin. Don’t let anyone tailgate you. If you can’t get them off your ass, wave them by.

Assume you and your motorcycle are invisible to motorists. Never assume that drivers see you, they probably don’t.

Cars turning left kill motorcyclists. Happens all the time, it’s probably the number one fatal car-motorcycle accident. Pay close attention to every intersection. Position your bike so it can be seen by anyone turning left. DON’T assume they see you, even if they are looking right at you. I have had people turn right in front of me while I was looking in their eyes.

Go your own speed. If you’re riding with friends don’t push yourself to keep up. It might be a little tough on your ego that they can travel faster, but drifting over the line in a turn you cant handle into the grill of a semi is a lot tougher.

You need to run scenarios through your head. If that parked car suddenly pulls out here’s what I’ll do. If someone runs that stop sign, here’s where I’d go. The only advantage a motorcycle has over cars is it’s superior performance envelope–braking, agility, size, acceleration. If someone stops without warning there a good chance you could avoid being the frosting part of the resultant car sandwich by running up the right or left side. But you need to have that as an alternative in your mind and muscle memory to take advantage of the potential. As someone who has avoided that fate several times I can tell you there are few things more gratifying than watching a five car pileup from the outside.

Then Comes More
More gear, better bikes, more practice, more courses. You’ve got to ask yourself if it’s worth all that. For me the answer is still yes, though I have to admit a lot of the fun has gone since my riding buddy got killed. Still, when I ride a country lane on my Norton Commado, listen to the lovely sounds bounce back from walls and berms. Feel the air on my face and the responsive creature underneath me, I’m nineteen years old again, riding my 1958 BSA A10 on the backroads of Massachusets. Heady stuff.